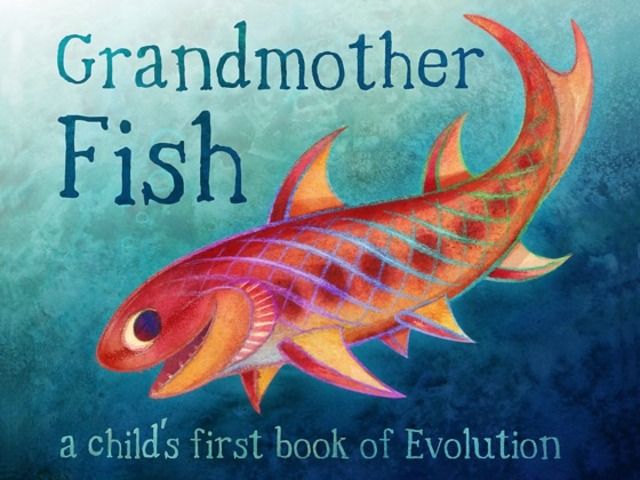 “Grandmother Fish” teaches preschoolers to love the idea that we are descended from animals. Can you wiggle like a fish?

Latest Updates from Our Project:

Many people have asked us how they can get their names or the names of loved one’s printed in the second edition of Grandmother Fish. Here’s how. There’s a special pre-order item in our online store called “Second edition special.” If you pre-order that item, we will print the name you list in the book, and we’ll ship you a second edition when they’re available. Enter the name you want printed in the online shipping form, where the form says “Full Name of Recipient.”

This offer is limited to 100 supporters. If you don’t see the Second edition special, then it’s sold out.

The 1st edition is basically sold out. If you want copies, they are available at Ada's Technical Books in Seattle. Email john@adasbooks.com. Karen and I also have a small number of copies that we were going to release as part of the Kickstarter. Now we plan to release them on our store before the holidays. We'll post an update when those last books go on sale.

Many backers have asked me whether Karen and I would do another kid-friendly, science-loving project on Kickstarter, and the answer is Yes! In January, I’ll launch a Kickstarter for “Clades,” an evolution-themed card game for kids and adults. In biology, a clade is all the organisms that are descended from an ancestral population. “Mammal,” for example, is the clade of all animals descended from the first mammals. To write Grandmother Fish, I had to learn about clades, and the concept excited me so much that I’ve created a game based on it. For years I’ve tried to figure out how I could do a game that gets evolution right, and in August an answer finally came to me. “Clades” is a smart card with a proven play style, and it’s easy to adjust for children or beginners. You backed Karen and me on Grandmother Fish, so you are getting our first official announcement. We hope to get your support again.

At last, Grandmother Fish is available in the States on Amazon. I know that you backers supported the book not just so you could get copies yourselves but also so that the book would be published and available to others. Getting on Amazon is the first big step to making this book available to children all over the world. Now that it’s easy to get the book, it’s a great time for you to make some noise about it. Here are some ways you can help get the word out.

Like Grandmother Fish on Facebook. When you share photos and posts from Grandmother Fish, it’s an easy way to let your friends learn about the book. Sharing the top post with the Amazon URL attached would be the biggest help. Facebook: https://www.facebook.com/grandmotherfish

Tell people you know about it: friends, parents, teachers, librarians, scientists or whoever you think will listen. It’s easy to find on Amazon even if you don’t have the URL.

Since I don’t have an advertising budget, I’m relying primarily on word-of-mouth, which means backers like you. Thanks again for all your support.

The last of the Kickstarter rewards are in the mail. Next, I have a modest number of pre-orders to ship. After that I’ll make Grandmother Fish available on Amazon, and that’s when I’m going to ask people to make some noise about it. It would be great for it to land with a splash!

For over 15 years, Grandmother Fish has been an idea in my head. Packing and shipping a thousand books has made it feel like a material fact. Of all the little creative projects that I’ve tinkered with over the years, this one has been my favorite. Now it’s here. Thank you so much for supporting it.

The shipping process is almost done. We tackled the more difficult orders first, so all international orders and all orders with special content have shipped. Of the remaining shipments, most have also shipped. The final packing and shipping shouldn’t take long, but it will have to wait until next week because I’m traveling (see below). Once the Kickstarter rewards are fulfilled, then I’ll fill pre-orders, and finally I’ll make Grandmother Fish available on Amazon. From there it’s anybody’s guess. Grandmother Fish already has a page on Amazon, waiting for me to supply them with inventory, and for someone to write the first review. To see the Amazon page, click here.

“Book Tour” in Brazil
Back in April, I was invited to attend a game convention in Brazil as the guest of honor. This invitation came because of my work in game design, but it will also be my first opportunity to tell people at an event about Grandmother Fish. Not exactly my first book tour, but close. We already have one order from Brazil. Maybe soon we’ll have more. Today I leave for Curitiba, where it is cooler and rainier than it is here in Seattle.

Thanks again for your support.
—Jonathan